Is getting a solar battery finally worth it? Solar technology is getting better, systems are getting cheaper, and installers are getting handsomer. Ahem. As of August of 2020, Australia reached 2.5 million solar panel and inverter installations, and 4-5 percent of these have battery systems installed.

That’s a lot of sun being caught, but not a lot being stored.

So, why don’t more homes have batteries? Until recently, it’s all been about cost. I’d guess most people think that solar battery systems were too pricey or wouldn’t last long enough to recoup the cost of installation. BUT the latest generation of battery tech, and potential in P2P energy trading, are changing the game.

I’ve been excited to see that quality battery systems are now at a point where their “cycling capacity” offers killer return on investment. A heap of systems have been improving on mad-genius Musk’s open-source battery tech used in Tesla vehicles and The Tesla Powerwall. That’s good news for you if you’ve been thinking about adding a battery to your solar rig.

If you’re into the boring technical stuff, you might be interested to learn that the industry average for lithium-ion solar batteries is around 6,000 to 8,000 cycles. As battery technology has improved, we’re now seeing upwards of 12,000 cycles on some solar batteries, like in the German-designed SENEC Home V3 Hybrid — which also comes with an industry-leading warranty of 20 years.

Solar battery power cycles, what the heck are they?

One battery cycle is a battery reaching full charge, then discharging a percentage of its total capacity. That’s pretty much one day of full-sun charging and an evening peak period when you’re using power but not generating it.

But homes typically have two peak periods of energy usage: the morning and the evening. During the evening, when the battery is depleted, some systems can automatically top-up from the grid to make sure you have enough juice in the case some dingbat clips a power pole. Never fear: the SENEC Home V3 Hybrid can be programmed to automatically recharge your battery at times outside your energy supplier’s peak period, further reducing costs.

Look for the maximum cycles possible; the nature of batteries is that they will degrade over time. More cycles = longer lifespan.

What’s the deal with discharge?

If you’re doing deep research into solar battery types, you’ve probably come across the term: ‘Depth of Discharge,’ or DoD. Depth of discharge is the percentage of battery storage that can be used regularly relative to its total capacity.

Different battery chemistries react differently to cycles of charging and discharging. Both lead-acid and lithium-ion batteries degrade as they are charged and discharged. That affects their performance and overall operational life. Lithium-based battery tech is more forgiving than lead, but even in ideal conditions and monitoring the DoD, all solar batteries will lose a little bit of efficiency over the years (don’t we all?).

For my choice, lithium-ion batteries offer outstanding longevity, while allowing around 80% DoD for daily use without excessive degradation.

Do lithium solar batteries need a lot of maintenance?

No, they need less work than looking after a cactus (even Stu can keep one of those alive). Provided your battery is installed correctly and operated in an acceptable temperature range, it’s not something you need to worry about. Lithium systems also contain a battery management system to monitor temperature, state of charge, life cycle, and other factors – and send the info to your phone.

What size solar battery should I get?

My mildly annoying answer is: it depends. (Sorry!)

The size of your battery system depends on your needs. A battery with 7kWh of electricity storage is usually enough to cover around half the average home’s daily energy needs. The SENEC V3 Hybrid is available in an expandable 4.5kWh or 9kWh array, promising solar households up to 90 percent power self-sufficiency.

Can I add more storage to my battery system?

Here’s the cool thing: you can add more storage to a SENEC modular system later if you want. What I love about that is it gives our customers the freedom to increase storage capacity when they need to (the maximum capacity for one system is 10kWh).

Most systems are compatible with any new or existing solar array; AC coupling makes installation quick and hassle-free.

Models like the SENEC Home V3 Hybrid are an ‘all-in-one’ system, which also features an inverter and battery management system. Because there’s a PV inverter, battery inverter, and back-up power in one unit, when there is a blackout, the unit’s two-phase power supply is still able to charge the battery with the PV panels, for a complete emergency power supply. 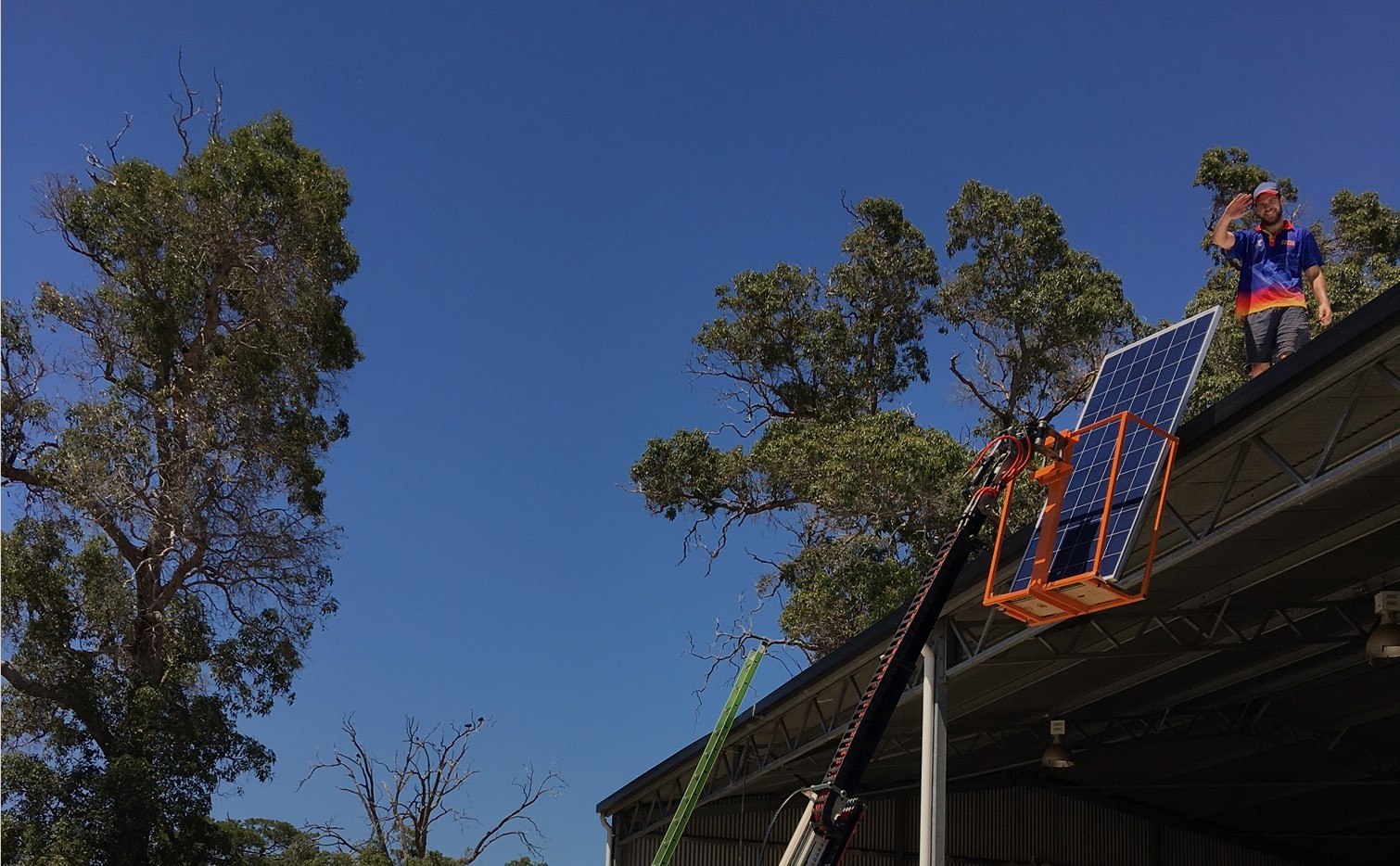 Alright smart guy. Is a solar battery worth the money?

Everything I do to my home is about making life easier and more secure for my family. For me, a solar battery system is a good investment to know that almost all the energy we use is guilt-free from the sun.

I’ll take you through how to calculate the expected financial savings achievable with a solar battery.

Step One: find out your feed-in tariff (FiT) rate. Since most of the higher tariff schemes are winding up within the next 12 months, some homeowners will see their FiT drop from 40 cents to a buy-back rate of around 3.5 cents (which is less than half of the rate you buy it for!).

Step Two: check any additional install costs. Wall-mounted models require compulsory extra fireproofing, However, SENEC managing director Jaron Schächter has stated that with a floor-mounted model, “you can just move it the recommended 30cm away from the wall, and then you don’t have to fire-proof.”

Step Three: Multiply the rate you pay for electricity by the amount of electricity that the V3 Hybrid will discharge over it’s warrantied life. (That depends on your system size — call us for a quote).

If you spend more on electricity over the life of the system than what you’d spend on implementing a battery system, it’s a no-brainer to install.

If you’re looking to install a complete solar system with panels, a system like the SENEC V3 Hybrid may be ideal as it features an inverter and battery management system all in one box, which can be monitored from your phone or tablet.

My mate has P2P set up. Do I need a solar battery for that?

There are currently a few trials of peer-to-peer (P2P) energy trading in WA, including one being developed by Curtin University in partnership with Synergy, Western Power and Power Ledger.

Connecting solar and batteries up to a P2P system creates a Virtual Power Plant (or VPP). Having a VPP means that in the case of a power shortage, you can supply the energy to companies for a premium. The SENEC Home V3 Hybrid is VPP ready, and the company already has some 30,000 units up and running in their native Germany, where I was surprised to learn that around 80 percent of new solar installations are done with storage.

How do I choose a solar battery system?

Here’s something that often confuses people: while a battery may say on the nameplate that it’s a 10kWh battery, it may not always have the capacity to store a usable 10kWh of energy. That’s because of energy loss in storage, because no battery is 100 percent efficient.

So what we need to look at is “roundtrip efficiency,” which is the ratio of energy put into a battery compared with the energy that comes out of it. If you had 98 percent roundtrip efficiency on a 10kW system, and an 80 percent DoD, it would translate to 7.84kWh of usable energy.

Before you choose a battery, think: where will the system go? Australia has strict battery standards around fireproofing for wall-mounted batteries if they are on any walls connected to habitable rooms. Even a floor-mounted model such as the SENEC V3 Hybrid does still require it to be in a non-habitable room, e.g. a garage or laundry.

Also, with many solar battery manufacturers based overseas, check if you can get local servicing. You don’t want to be shipping an inverter all the way back to China for inspections. SENEC is the only global battery storage manufacturer with an office and onsite support team here in Perth.

Why having a solar battery matters more in 2021

2019 was Australia’s second hottest on record according to the Bureau of Meteorology, but the climate isn’t the only thing that’s changing. The change to working from home has many experts concerned that electricity demand could put grids into meltdown and bring higher power bills in the coming months.

Why? More premises using air-conditioning during peak periods. I can see why they’re worried too – roughly a third of Aussie battlers are working from their homes as a social distancing measure, which might mean a hot summer of brownouts as the grid struggles to cope.

For many Australian families, especially those on a fixed income or working from home, installing a quality solar battery system now may be the ideal investment to achieve energy independence. The Koala Solar team will be happy to answer any questions you might have about installing or upgrading your solar power system.